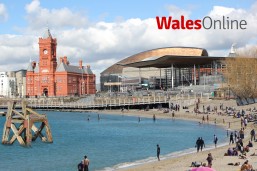 Cardiff Bay is known the world over for the waterfront development that transformed an abandoned docks into a thriving tourist destination. But can you imagine how it would look with a beach? How different it would be with a beach next to Mermaid Quay and a swimming pool in the oval basin

Architect Nicholas Socrates‘ vision of how the bay could look if a beach was constructed next to Mermaid Quay. It also shows the basin at Roald Dahl Plaza transformed into a lido, with people swimming as the Wales Millennium Centre looms.

Nicholas said: “Barcelona is a model city. The most famous beach in Barcelona is Barceloneta stretching for three miles. It is an artificial beach but it is marvellous and beautiful! During summer, the beach is always crowded with locals and tourists.

“Barcelona’s waterfront was originally an old industrial area of vacant warehouses, factories, and rail yards, furthermore, it was polluted by vast landfill sites.

“However, in preparation for the 1992 Olympic Games its waterfront was regenerated with its artificial sandy beach being a central focus.”

Water quality is key to the success of the proposed Cardiff Bay beach.

Nicholas said: “The water within the barrage is supplied from the river Taff and the river Ely with a small amount of salt-water ingress from the main locks whilst allowing boats to pass through.

“Thanks to the installed oxygenation systems in the bay the quality of the freshwater is greatly improved.

“The aeration systems may need to be increased and other techniques utilised to improve the water quality to a state where full leisure recreation, like swimming, can take place.”

Greater connectivity between Cardiff Bay and the city is crucial.

Nicholas said: “There are various transport projects aimed at providing greater connectivity between the bay and the city and the wider region at large, but what should take precedence is the regeneration and activation of Lloyd George Avenue to create an exciting boulevard for pedestrian flow, consequentially seamlessly integrating the city into the bay.”

Nicholas said: “Another innovation is to flood the Roald Dahl Plaza bringing the water back into the Oval Basin in front of the Wales Millennium Centre thereby creating a public lido re-animating a former industrial waterway into leisure, activities and recreation.”

END_OF_DOCUMENT_TOKEN_TO_BE_REPLACED 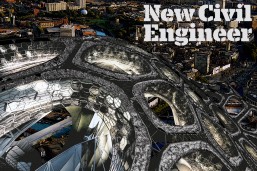 Cities are about people. Our population must be central to our thought processes when planning our future cities.

This increase in population will create many urban challenges.

Our cities must evolve and reinvent themselves to be able to foster a better quality of life for the people in eventually overcrowded cities.
One specific challenge we face is how to meet our current housing demands?
We must move away from the unsustainable idea of suburban sprawl and building on greenfield sites to the idea of a much more efficient and well-designed urban environment.

Density is therefore a problem so what if our cities themselves take to the sky?

IMAGINING THE CITY OF THE FUTURE

A great domed construction of vast, inter-connected mega-structures: A city above the city, a city in the sky.

This future vision will receive criticism and praise along a wide spectrum, from a pessimistic, dystopian view to an optimistic, utopia-like solution.

While each of these poles of thinking are problematic in their own right – The vision warps our present understanding of the city, and therefore furthering our dialogue about how to solve real problems that our cities are going to be faced with in the decades to come. 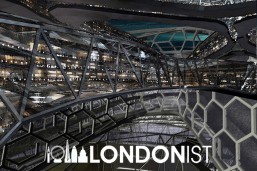 It’s London but not as we know it. This artist’s impressions of a future London was a shortlisted winner of a competition launched by estate agent Cluttons and property news magazine Estate Gazette. Will the metropolis of tomorrow be a land of aquacities, sky gardens and huge alien-looking domes?

“A great dome construction of vast, interconnected mega-structures: a city above the city, a city in the sky. The Dome would provide mixed-use city infrastructure, able to exist above any city, with offices, living and retail spaces. Inspired by the harmonious, closely integrated communal living of bees, the Dome comprises of hexagonal structures which allows for a column-free, curved formation enabling the building to span further distances. This curving provides a natural, flowing counterbalance to the Dome’s geometric, hexagonal structures.”